What does every Rock Band have in common? The blissful, but the electric sound of the rock guitars which defines the very genre of the Rock!

Whether it Led Zeppelin or Nirvana you are listening to, evert guitarist in Rock Genre is nothing without his guitar, neither the guitar without a guitarist.

Choosing the best rock, electric guitar in this vast field is quite difficult, all because there have been too many in modern days. In this best rock guitar section, you will find a wide range of pricing lists, this can from high-end ones to the cheaper ones.

Without compromising the quality in rock music, we are listing the 6 very best Electric Rock Guitars of all time which may be a good choice for someone looking for rock the “F” out of the audience! 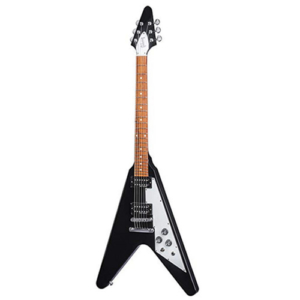 A rock guitar with the most unusual and remarkable design, Gibson Flying V was originally designed in 1958 which was first played by the world’s top guitarist Jimi Hendrix from the 1967-1968 era. He featured the Flying V in a very intense manner that his iconic cover blew many audiences.

The same V-shaped guitar by Epiphone is currently being strongly riffed by some popular guitarists such as Brent Hinds. The appearance of Gibson Flying V is very glazing and appealing to the eyes, it comes in a mixture of Humbucking Pickups and stops bar tailpiece.

The body and neck are fully mahogany made which contributes to making this guitar making VIVID ROCK TUNES. For a guitar player who is looking for simultaneous high pitched riffs, constant longer notes or eccentric touch, the Gibson Flying V can do it all.

The latest model of the Gibson 2019 flying V model comes with some extraordinary features which are Dirty Finger+ Ceramic Pickups which merges beautifully with Mahogany tonewood and creates maleficent sound. A must choice for a perfect rock band who believes in making music instead of showing gimmicks! 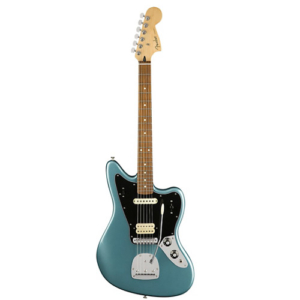 Jaguar series is the most interesting part of the guitars in Fender history, made in 1962 the guitar became the signature for most rock music but then it was discontinued in 1975. Even after this, it became the most integral part of many punk rock players and instantly became the indie scene of the ’80s and ’90s.

The body and neck feature a slim construction and design that can suit in smaller hands. The overall body is wooden with a maple neck and a rosewood fingerboard which has 22 frets. The white dot markers make it easy for players to sustain the notes.

The hardware of the Fender Jaguar is glittery and chromium! With 6-strings made of Chrome hardware, a separate Tremolo plate is placed close to the bridge to make the break-angle enhanced. This can deliver a magnified and ultra-deepening sound.

Fender Jaguar has an amazing set of electronics; a set of 2 single-coil pickups is included which may be ordinary in terms of configuration. The onboard set of controls makes it easier for the player to cover multiple genres. With this, the Jaguar has a filter switch, a bright switch, a cut switch and a standard tone control knob with the master volume knob. 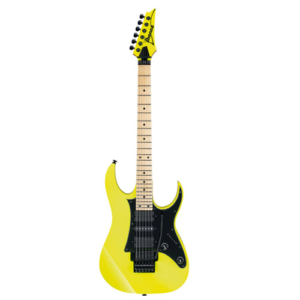 Ibanez RG550 is one of those best rock guitars which can suit the demands of many metal players. Going back to the ’80s where we have known some incredibly fast necks dive-bombing solos, huge tone, and vigorous play, the RG550 was the top choice for many rock guitarists.

One of the best features of Ibanez RG550 is featuring of 5-piece maple/walnut neck with Ultra-Fast Wizard HP Profile system. This is perfect for the players who like their rock guitars perfectly comfortable and those who like to generate bigger riffs and shred solos.

By the looks, RG550 is a lightweight guitar with a double-cutaway body, this is for reaching for the higher frets and to move the fingers smoothly across the frets when the mood strikes for fast but easy playing. The HSH pickup settings result in a wide range of harmonic rich tones and the locking tremolo gives total control and solid pitch.

Gibson Les Paul is the best rock guitar of all time, with the 2012 model it comes with tons of surprises for the users. The American made Gibson is 100% perfect in its design and playability, the classic LP shape is made from solid mahogany wood with Triple-A (AAA) figured maple top.

The neck of Les Paul Standard 2012 features a slim but irregular profile that matches the build perfectly. You will also find a remarkable feature like a pair of high gain BurstBucker Pros and Special HP-4 High-Performance Circuit and controls with extreme comfort and ease. 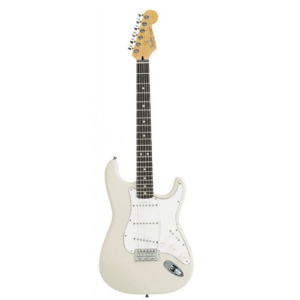 Fender Stratocaster is the instrument in rock and is a classic model in this category. Made in 1954, the guitar became the pioneering tool for many rock bands. The strat look of the guitar made other companies take inspiration from this and so far many came up with the slightly altered design.

It’s a double Cut-Away guitar that mostly suits the country players, but it also been widely used as setup displayed in many musical genres. The humbucking pickup configuration appears in the hard rock style, not to mention Fender Stratocaster was once used by Pink Floyd, Jimi Hendrix, and Eric Clapton. The single-coil sounds amazing with astonishing distortion potentials.

Some changes were done in the internal hardware of the Fender Stratocaster, like to include the very latest and innovative N4 noiseless pickups that eliminate every type of hum. 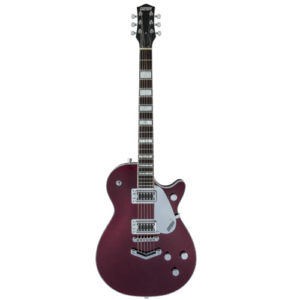 Let’s not forget about the dying star of Rock music, Gretsch was once the rhythm guitar sound of AC/DC which comes in such an easy price that everyone can afford. You can expect so many things from Gretsch G5220 like fantastic rhythm playing and ear-catching sounds with a taste of classical tones with a modern turn. On-board, there are a black top Broad Tron Humbuckers which have more power than the vintage Gretsch models.

Users can shape their tones, however, they like with Gretsch’s versatile controls. This guitar gives you a complete pickup volume controls, master tone, and master volume and a treble bleed circuit which lets you control the pickup and tone setting.

The mahogany body with maple top almost gives a soulful sound, the Gretsch G5220 Electromatic Jet BT may be a mid-range rock guitar which emphasis big low-end and shimmering highs.

What to Look in the Best Rock Guitar Before Buying?

First of all, you need to know what Rock Genre or Music sounds like, as you need to go back and search for the artists like beetles or AC/DC, on Jovi, Guns n Roses, Led Zeppelin to understand the very nature of a Rock Band. You will also include some offshoot genres (punk rock, post-punk revival, grunge) which can clarify further the very style of rock music.

With so many mixed up sounds and genres evolving these days, an ideal rock guitar should offer the following features.

Speed is the foremost concern in the metal genre, although for good rock music you should see how fast a guitar feels. Rock is the musical genre that has a variety of speedy materials such as quick chord changes, faster riffs, and scorching solos. For this purpose, one must get a rock guitar with a slim built and a comfortable neck, like the Les Paul or Stratocaster fills these criteria most efficiently.

It is always necessary for pickups that humbuckers are present on the premise. Rock guitarist over the years has promoted a very astoundingly made music with the single-coils, but when the temptation for more gains and volume knocks, there you need a humbucker fitted to the Axe. There are choices in the pickups, whether you want to go to the active or the passive ones

In rock music, the use of passive pickups encourages the style and choice with thick, warm and organic sounds. This can be ideal for both rock rhythm and lead tones a guitarist can play.

Hardware that supports the tuning stability is the best, whether you play the classic rock leads or punk rock rhythms. This comes in the shape of a fixed bridge which ensures the greater playability of the users and reliability of the hardware. A tremolo bridge and solid bars must not be given up, the locking bridge and nuts should be of prime concern which is the foremost supporter for Divebombing!

Finally, always choose the guitar, which is comfortable to play and the pickups can be easily coped up with the level of your gains. After this comes to your desired style that lets you determine which guitar you want. Every rock star portrays himself in a form of intense guitar play, for this you need something that suits your style with colors that may appeal audience!

Should You Buy High-End Models or Entry-Level Rock Guitars?

There are guitar models that could go beyond your price range, of course, we could have detailed the $2,000-$4,000 worth instruments, but a real guitarist never looked at the price but the comfort he gets when he holds a guitar!

You could either get the Gibson’s Les Paul Model if you have a high-end budget or simply buy something from Epiphone or other affordable versions we mentioned in our list. For the stage performance and recording, buying anything from Fender can be of great money’s worth.

For getting the best rock guitars, one must always concern about the electric rock models. The list of 6 best rock guitars has some major benefits for the users who are either new to the rock genre or pro in this field.